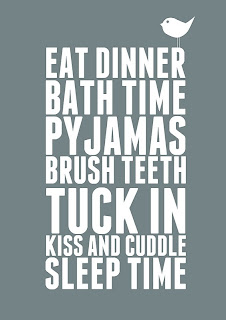 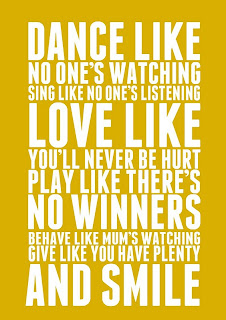 I found these wonderful message prints online today at Make it Perfect. There are many to choose from. All you have to do is drag them to your desktop. I can't wait to print and frame these for my daughter's room.  She gives some other clever ideas for using these on her blog. Check it out! 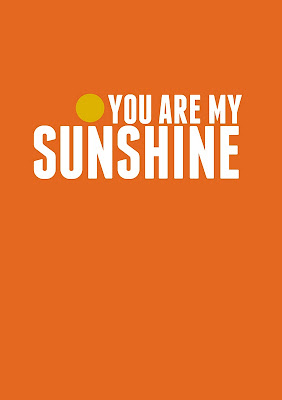 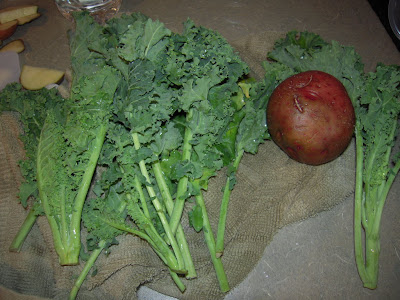 I love Zuppa Toscana soup. The last time I ordered it at Olive Garden I thought, "I want to make this." So I looked it up online and found a lot of recipes posted.  They were all similar, and just what I thought: sausage, potatoes, bacon, kale, chicken stock, and a little cream.  I used this recipe.  One difference is that I used red potatoes, which worked great.  I chopped the potatoes first, so they could start cooking in the pot with the seasonings and chicken stock. While that was cooking, I started on the meat. 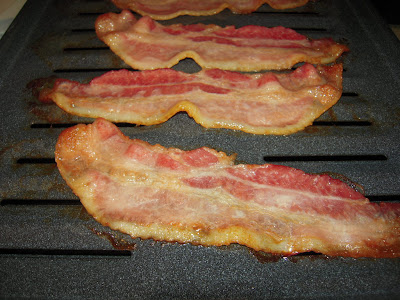 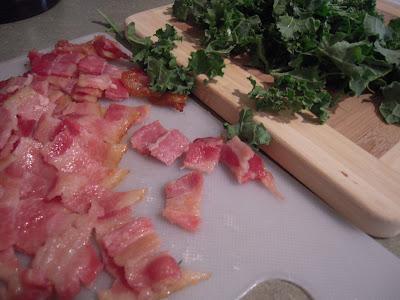 After 10 min, I added the kale and heavy cream. 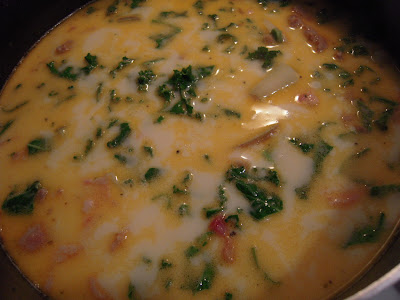 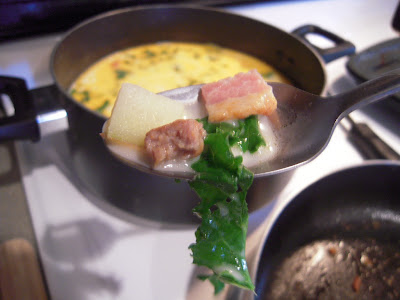 That's it! It was delicious. It tasted just like at the restaurant.  Actually, a little better. ;)

With some of the kale I had left, I tried making kale chips.  Sounds weird, but they're really tasty. I got the recipe from smitten kitchen, which is a great website. Basically, you tear the kale into pieces, toss it with olive oil and salt, and bake at 300 for 10-20 min.  It's a little tricky, though. My first batch burned and was too salty.  The second batch was just right.  If you're leery, let me tell you that my veggie-hating husband loved these! 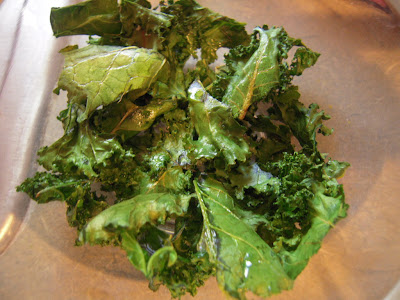 Email ThisBlogThis!Share to TwitterShare to FacebookShare to Pinterest
Labels: recipes

I am so excited that my little sweetie will be turning 1 next month! It hit me a few months ago... I have to plan a kid's birthday party! I'm not used to throwing parties, but now that we're parents it's a new yearly tradition.  I've looked around at decorations, and am not excited to spend (so much) money on cheesy paper decorations that will go in the trash. Being the creative and crafty girl that I am, I think I'm going to design my own.  I'm thinking of a #1 theme.  I found these GREAT blogs for party inspiration. Check them out if you have any kind of celebration coming up.  Also, please share your favorite birthday party idea to help me out.  Next month I'll post the party pics. 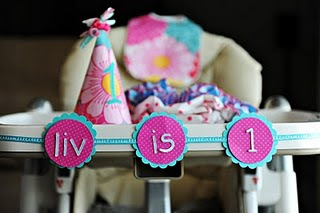 Hostess With the Mostess 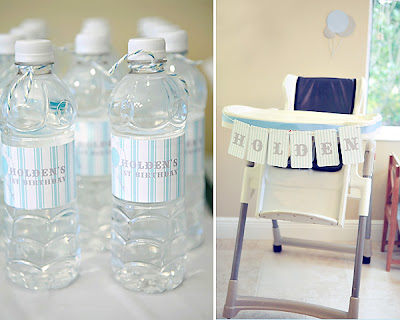 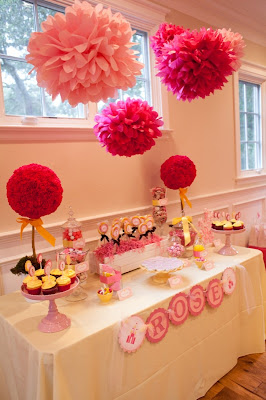 Walk a Mile in My Shoes

Don't you love silver shoes? I just found a pair of Sbicca silver wedges at Ross for $16. Here's what they look like during a day in my life...
At home with baby, I'm always in the kitchen!
I don't even want to think about how much time I've spent here!
I LOVE the time spent here!
I do get out sometimes!
...even if it is only to the grocery store. :)
With a baby, even the grocery store is an adventure!
It was a good day.
No comments:

Email ThisBlogThis!Share to TwitterShare to FacebookShare to Pinterest
Labels: style 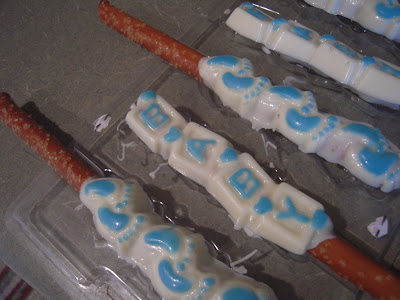 I really don't mean to have a chocolate theme going here.  I do have to admit that I am more of a chocolate lover lately. Maybe it's a postpartum thing. Speaking of pregnancy... Isn't it so fantastic when your best friend is expecting?  That's how I feel, so I was so excited to whip these up for her baby shower.  Ok, you can't just whip them up.  They're a little more time-consuming than I thought, but still fun and easy.  However, if you are not using a candy mold it's super fast and easy. 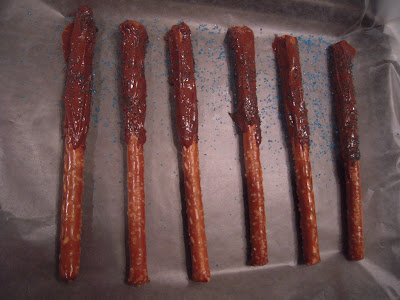 With my candy mold, I decided to only use one color, so I melted the blue candy melts first in the microwave.  Melt them at half power for 1 minute.  Stir, then heat at 30 second intervals until melted. After a few trials, I found that a toothpick worked great to fill in the spaces with blue. (That's the time-consuming part.) When your done, you have to let it set for a while.  The fridge or freezer will help speed up the process. 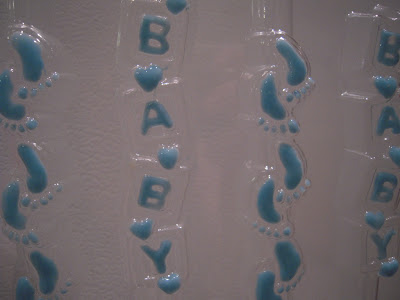 Next, I melted the chocolate in the microwave at half power for 1 minute, then at 30 second intervals until melted. I never knew it was this easy to melt chocolate! No double-boiler needed.  I spooned the chocolate into each mold and spread it out evenly.  The pretzel rod fits right into the mold, and with a turn is covered in chocolate. 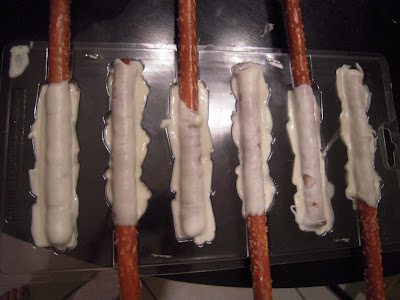 The pretzels set up after about 45 minutes in the refrigerator, and I was pleasantly surprised at how easily they came out.  I just twisted the mold like an ice cube tray and they were free!
I had a small amount of chocolate left, so I just used a spoon to 'paint' it onto a few more pretzels and  added blue sprinkles.  This is what I would do for us at home, or for a party.
hmmm... What else can I cover in chocolate? 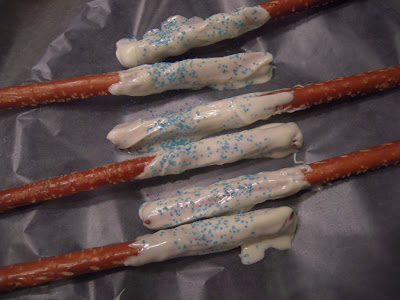